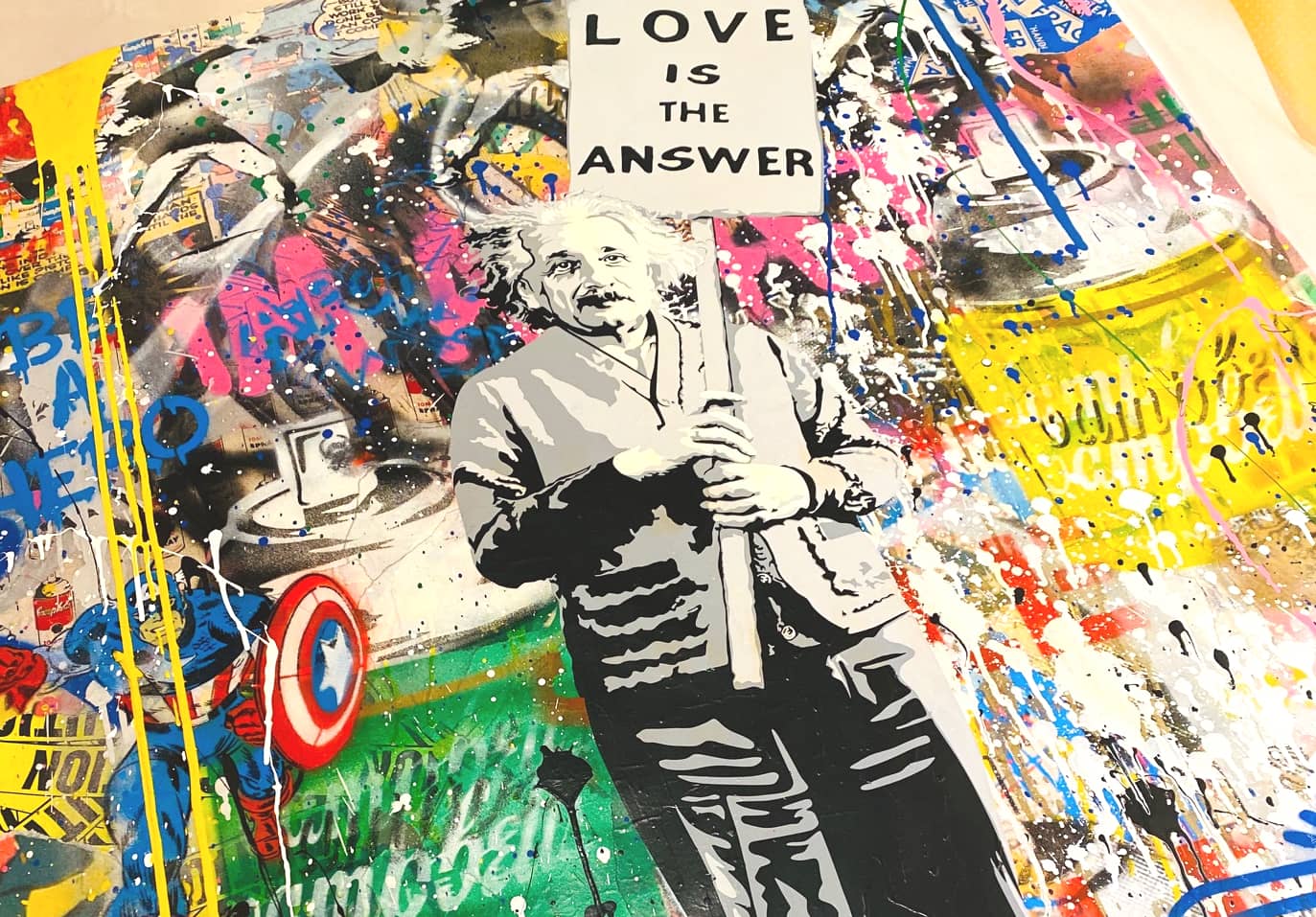 Hardly any other street art artist has experienced such a rapid rise as the Frenchman Thierry Guetta aka Mr. Brainwash, born in Garges-lès-Gonesse in 1966. His path to becoming the most successful artist of recent years is closely linked to the name Banksy and his Oscar-winning film “Exit Through the Gift Shop”: In this documentary Banksy encourages the then still unknown Guetta to become active as an artist himself under the pseudonym Mr. Brainwash. The rumor that the Frenchman Mr. Brainwash is a purely fictitious person invented by Banksy is therefore persistent. Of course, this has been refuted for a long time, as Mr. Brainwash has meanwhile appeared in public several times and received awards. Mr. Brainwash has also been designing huge murals in New York in memory of the 9/11 attacks.

The lavish use of spray paint and stencils has become his trademark for his unique and original Street Art works.

To Invest in Art of Mr. Brainwash is considered by many Art Critics and Expert to be an intelligent Investment. Our Advice when you are deciding to invest in art, is to spend time researching and to think with your head and your heart. A good research is to look for “Mr. Brainwash Net Worth”. We can easily find that actually in 2019 MBW net Worth is 20 Million Dollars and in 2016 was about 10 Million Dollars. The non-conformist choices made by of MBW compared to traditional street art are among the reasons of the continious growth of Thierry Guetta’s patrimony. The Artist Mr. Brainwash (미스터브레인워시) has for example chosen to convey his art mainly through events and galleries, except for some building or urban wall. This decision, together with other choices, make the value of Mr. Brainwash Art Grow continuously.

In February 2020, Mr. Brainwash (미스터브레인워시) announced that the former Paley Center for Media in Beverly Hills, designed by architect Richard Meier in 1996, would be temporarily converted into his own museum. The Mr. Brainwash Gallery Collection will be presented there. His most successful major works are “Einstein – Love is the Answer”, “Cover Girl – Kate Moss”, “Everyday Life – Follow your Dreams”, “Juxtapose”, “Never give up” and “Life is Beautiful” alongside “Balloon Girl”. The works of Mr. Brainwash are almost always unique, rarely there are also limited editions. FRANK FLUEGEL GALERIE receives all unique and original works directly from the artist’s studio in West Hollywood / Los Angeles. Many of Mr. Brainwash originals have already been successfully sold at high prices at international auctions. In 2020 the gallery has published the edition “Stay Strong” in cooperation with Mr. Brainwash, which is exclusively available. The gallery has represented the street art artist in German-speaking countries since 2012 and was the first gallery to present Mr. Brainwash’s work in Germany. Several exhibitions have already been presented in the gallery rooms in Nuremberg and Kitzbuehel, an Austrian Ski resort.

An investment in stencil works of art by Mr. Brainwash, no matter whether originals, unique pieces or limited editions is therefore always sensible, as the works can retain or even increase their value. Numerous works have already been successfully auctioned at Sotheby’s or Phillips auctions. Based on the motto of Mr. Brainwash: Dream Big Dreams.

You must Know that this Art e-Commerce is not only for for the Purchase of Contemporary Art in Europe. We are structured to offer Shipping for Mr Brainwash Art for Sale around Europe within several Days. But we also Ship in every country of the World.

We only deliver our MBW art for Sale with Insured Couriers. In this way you’ll be 100% ensured from potential Damages or theft.

In London, another mural by Mr. Brainwash was released on September 20, 2021. The mural is located at the newly opened subway stop Battersea Power Station in London. The new stop was designed by several street art artists.

French artist Thierry Guetta, a.k.a. Mr. Brainwash, who became known for his appearance in Banksy’s film Exit Through the Gift Shop (2010), is getting his own documentary. The feature-length film comes from OBB Pictures and is directed by Michael D. Ratner, who also directed a feature on Justin Bieber.
The film, “Mr. Brainwash,” will use never-before-seen archival footage to document Thierry Guetta’s journey from obscurity to worldwide street art phenomenon. The documentary will feature interviews with Banksy and other major figures in the street art scene, and will show an insight into Thierry Guetta’s life and his collaborations with Madonna, Michael Jackson, the Red Hot Chili Peppers and the Pope. The film also explores the roots of Mr. Brainwash’s identity and questions our fascination with art, talent, and ubiquity while serving as a critique of modern art.

The gallery also has on sale, in loose order, Mr. Brainwash’s coveted works on cement, corrugated metal, wood or brick.

Longtime University Health Network (UHN) supporter Mr. Brainwash (Thierry Guetta), donated his Giant Heart Balloon, 2021 sculpture to  the 17th annual Grand Cru Culinary Wine Festival. Eleven generous donors came together, each pledging $100,000 for a total of $1.1 million, to gift the impressive sculpture in support of medical research and innovation at UHN. The sculpture will be placed on display at Toronto General Hospital.

Mr. Brainwash - At FRANK FLUEGEL GALERIE you will find a selection of unique works by Mr. Brainwash.
Go to Artist Portrait...