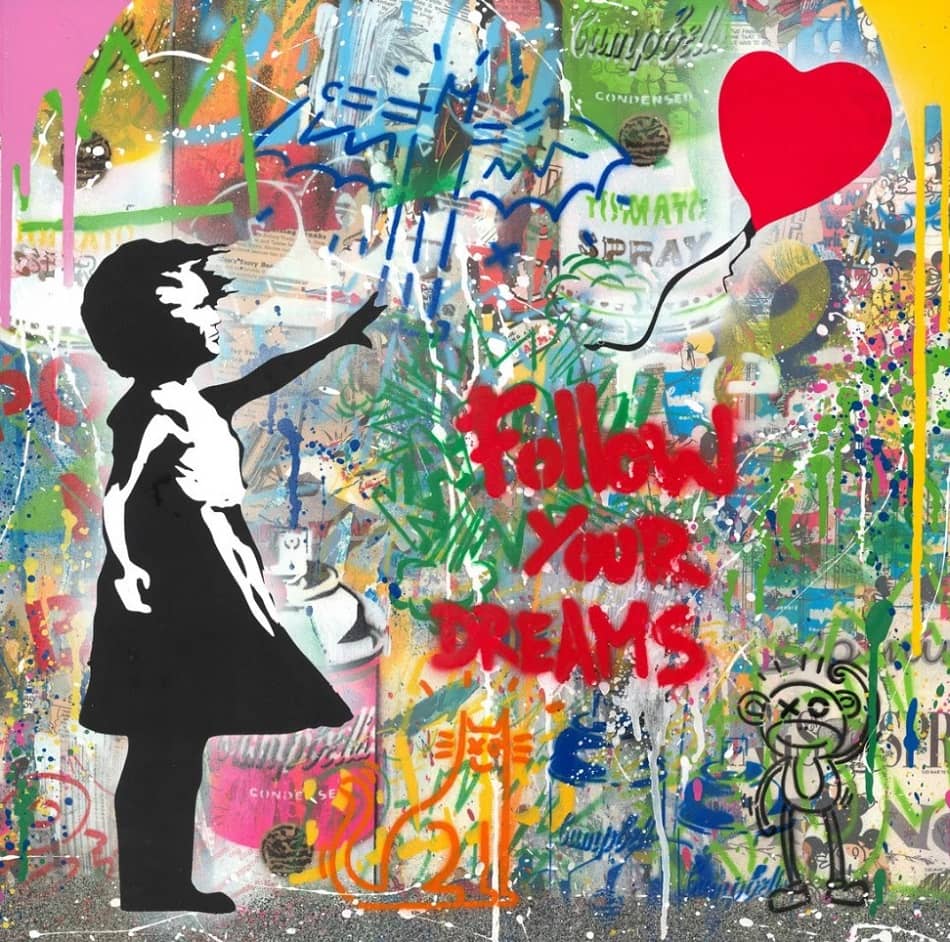 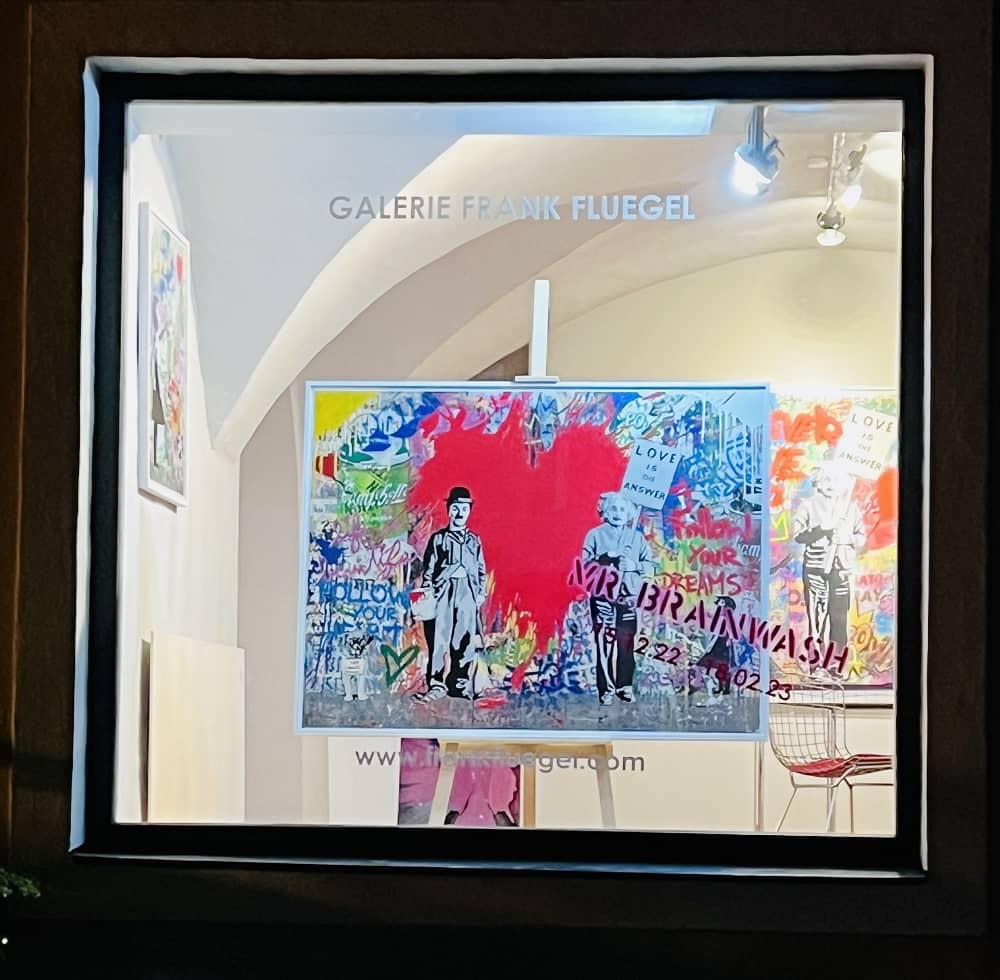 Balloon Girl 2022 by Mr. Brainwash has become a symbol of street art just like the template of his mentor Banksy.

Balloon Girl Appartment Size by Mr. Brainwash (Thierry Guetta – 미스터브레인워시) is based on a work by his mentor with whom he also made his documentary Exit Through the Giftshop. Girl with Balloon (also Balloon Girl or Girl and Balloon) is a London series of stencil paintings by graffiti artist Banksy begun in 2002. It depicts a young girl with her hand outstretched pointing at a red heart-shaped balloon being carried away by the wind. The first work was on Waterloo Bridge, and there were other murals around London, but none of them have survived. Banksy has used variations of this design several times to support social campaigns: in 2005 about the West Bank barrier, in 2014 about the Syrian refugee crisis, and also about the 2017 UK election. In a 2017 Samsung poll, Girl with Balloon was ranked as the most popular artwork in the UK. From Mr. Brainwash, the motif comes in a variety of sizes like this one as a quadrant.
Paint sketches and stencils imprinted between layers of colour differ from paper to paper, making each paper by the artist a unique work of art. The subject of the work is the little girl in the dress who became famous in Banksy’s “Balloon Girl” artwork. The little girl regretfully looks at her red balloon flying away, conveying a feeling of sadness, that we can fully perceive even though her face is not painted in detail.
Both Banksy’s “Balloon Girl” and Mr. Brainwash’s “Balloon Girl” have the same meaning: childhood gloomily runs away while time flows undaunted.
In 2018, a framed copy of the work was spontaneously shredded during an auction using a mechanical device hidden in the frame. The artist certified that he was responsible for the shredding and gave the altered work a new name: Love is in the Bin. Sotheby said it was “the first work in history ever created during a live auction.” Mr. Brainwash repeatedly references artworks by his mentor and interprets them in his own way. In doing so, the original white background in Mr. Brainwash’s work is typically colorful with collages, silkscreens, stencils and comic books. The cheerful and carefree is thus even more clarified true to the motto of Mr. Brainwash: “Life is Beautiful” or “Follow Your Dreams”. Hardly any other street artist has experienced a comparably rapid rise as the Frenchman Thierry Guetta aka Mr. Brainwash, born in 1966 in Garges-lès-Gonesse. His path to becoming the most successful artist of recent years is closely linked to the name Banksy and his Oscar-winning film Exit Through the Gift Shop: In this documentary, Banksy encourages Guetta, who was still unknown at the time, to become active as an artist himself under the pseudonym Mr. Brainwash. The rumor therefore persists that the Frenchman Brainwash is a purely fictitious person invented by Banksy and that his works are actually created by Banksy. The Banksy painting “Game Changer” was sold at a new record price at a Christie’s auction in London on March 23, 2021 for a hammer price of 14.4 million pounds ($26 million). With fees, it came to a final price of 16.758 million pounds ($30 million), a world auction record for Banksy, according to Christie’s.

Hardly any other street art artist has experienced such a rapid rise as the French Thierry Guetta aka Mr. Brainwash, born in Garges-lès-Gonesse in 1966. His path to becoming the most successful artist of recent years is closely linked to the name Banksy and his Oscar-winning film Exit Through the Gift Shop: In this documentary Banksy encourages the then still unknown Guetta to become active as an artist himself under the pseudonym Mr. Brainwash. The rumor persists that Mr. Brainwash is a purely fictional person invented by Banksy and that his works are actually created by Banksy.

Girl with Balloon (also known as Balloon Girl or Girl and Balloon) is a series of graffiti works on public walls in London, started in 2002 by graffiti artist Banksy. It shows a young girl pointing with outstretched hand at a red heart-shaped balloon carried away by the wind. The first work was on Waterloo Bridge, and there were other murals in the London area, none of which have survived.