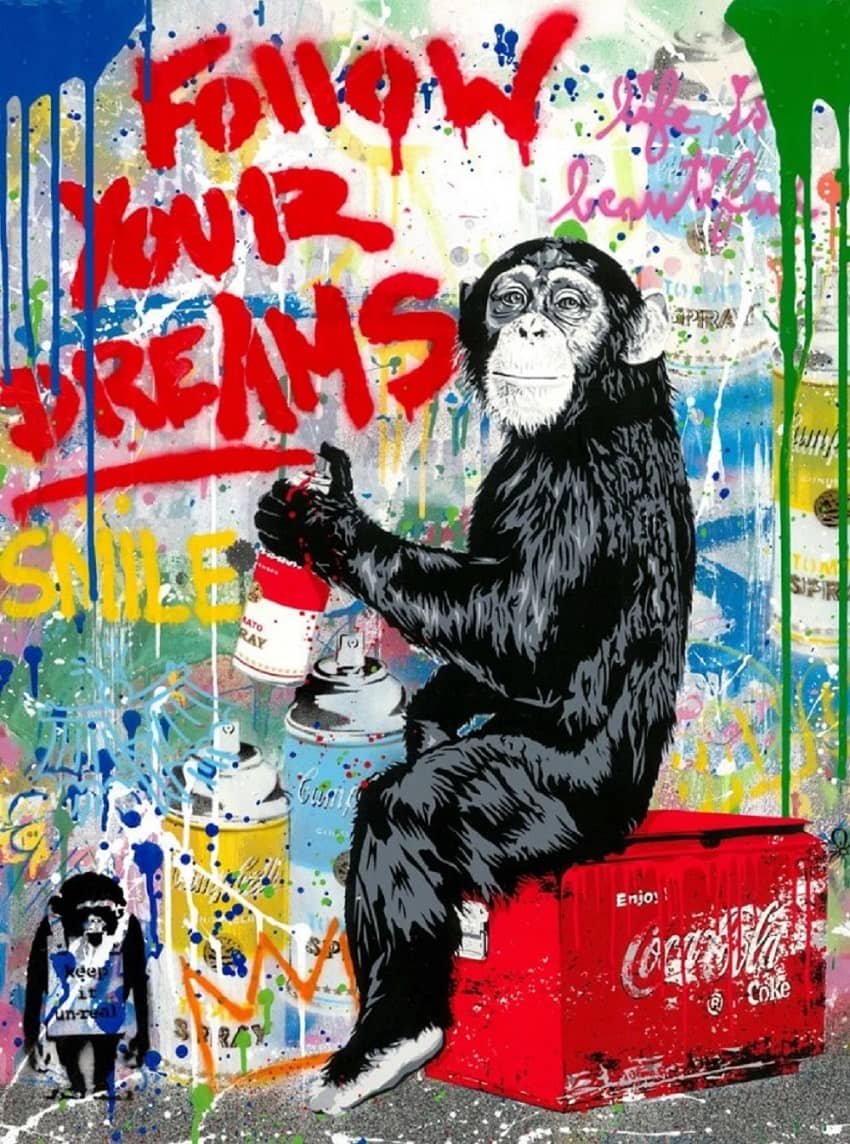 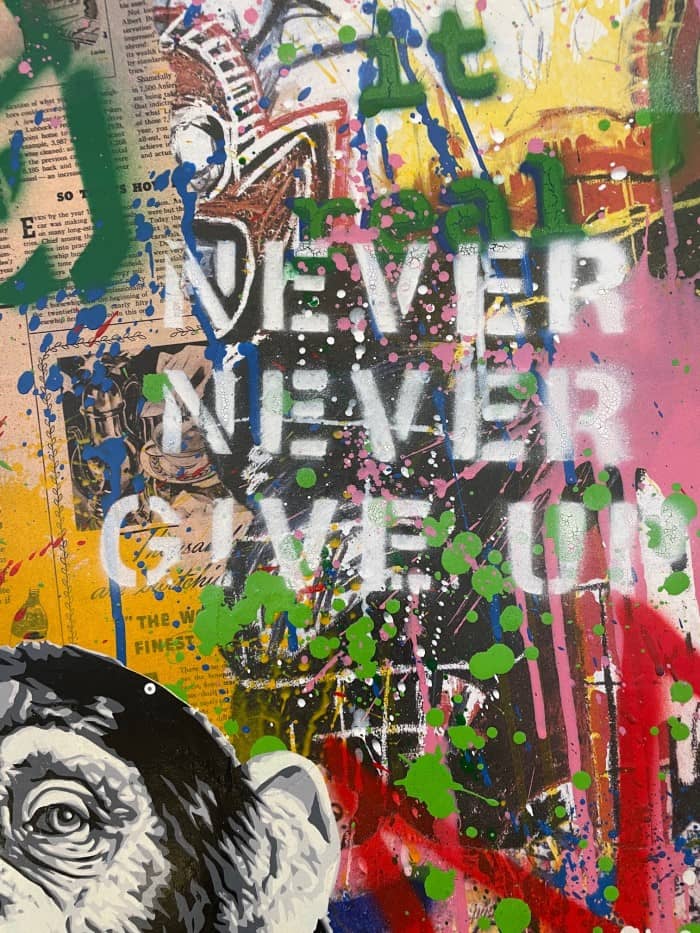 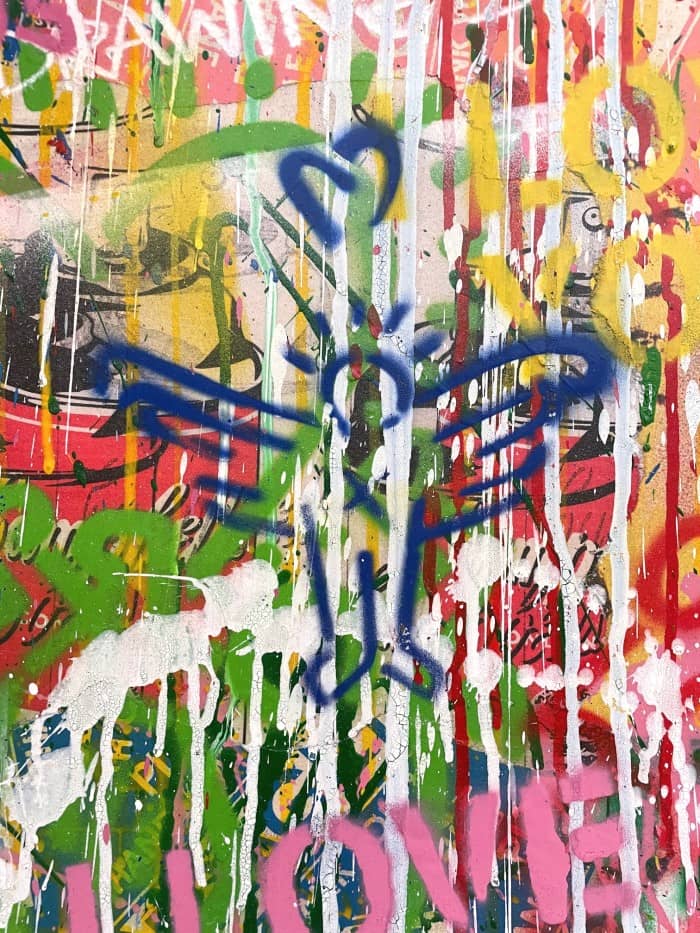 Mixed media unique pieces like Everyday Life - Follow your Dreams, are among the most sought-after works of the street art artist Mr. Brainwash. The main motive, the chimpanzee on the Coca Cola box is a stencil that is sprayed on changing backgrounds. These backgrounds are composed of new compositions, which are built up with the help of old comic books and magazines, first as a collage and then sprayed with different stencils. Finally, acrylic paint is poured on top of it to obtain the unmistakable colour streaks. Some of the works also contain cement as a background component, a matt grey cement paint.

Mr. Brainwash Everyday Life – Follow your Dreams short EDL or F.Y.D. is an original mixed media work on paper with screen printing, stencil, acrylic painting, collage and spray paint. A unique piece of art with the theme “Follow Your Dreams” proclaimed by a monkey on a Coca Cola crate. Mr. Brainwash’s signature can be found on the front and on the back with a dollar bill serial number.

Monkeys, and chimpanzees in particular, have always found their way onto paintings in art there is even a scientific paper on the subject. This is probably why the mischievously smiling monkey is one of the most sought-after motifs of the street art artist Mr. Brainwash.

Mr. Brainwash’s uniformly subversive style fuses historical pop imagery and contemporary cultural iconography to create his own pop art – a graffiti hybrid. The development of this style has catapulted Mr. Brainwash to international fame. Mr. Brainwash’s first solo exhibition, Life is Beautiful, was held in Los Angeles in June 2008 and featured over 100 works of art. In addition to Mr. Brainwash’s widely recognized iconic art paintings, Life is Beautiful featured larger-than-life art installations, including a 20-foot robot made from old televisions and a life-size replica of Edward Hopper’s Nighthawks and a pyramid made from 20,000 books. Originally scheduled to open for only two weeks, the art exhibit was extended for three months and attracted more than 30,000 visitors.

Hardly any other street artist has experienced a comparably rapid rise as the Frenchman Thierry Guetta aka Mr. Brainwash, born in 1966 in Garges-lès-Gonesse. His path to becoming the most successful artist of recent years is closely linked to the name Banksy and his Oscar-winning film “Exit Through the Gift Shop.” In this documentary, Banksy encourages Guetta, who was still unknown at the time, to become active as an artist himself under the pseudonym Mr. Brainwash. The rumor therefore persists that Mr. Brainwash is a purely fictitious person invented by Banksy and that his works are actually created by Banksy. Everyday Life – Follow your Dreams with the chimpanzee on the Coca-Cola crate, an old vintage cooler that casually holds the spray bottle in his hand to spray his leitmotif “Follow your Dreams” on the wall embodies the street artist as Marilyn for Andy Warhol became the recognition mark. So Thierry Guetta also refers to it because the spray bottle looks like the famous Campbells soup cans when you look closely. On almost every one of his unique pieces, symbols of Keith Haring or Marvel Comics can also be seen in the background.