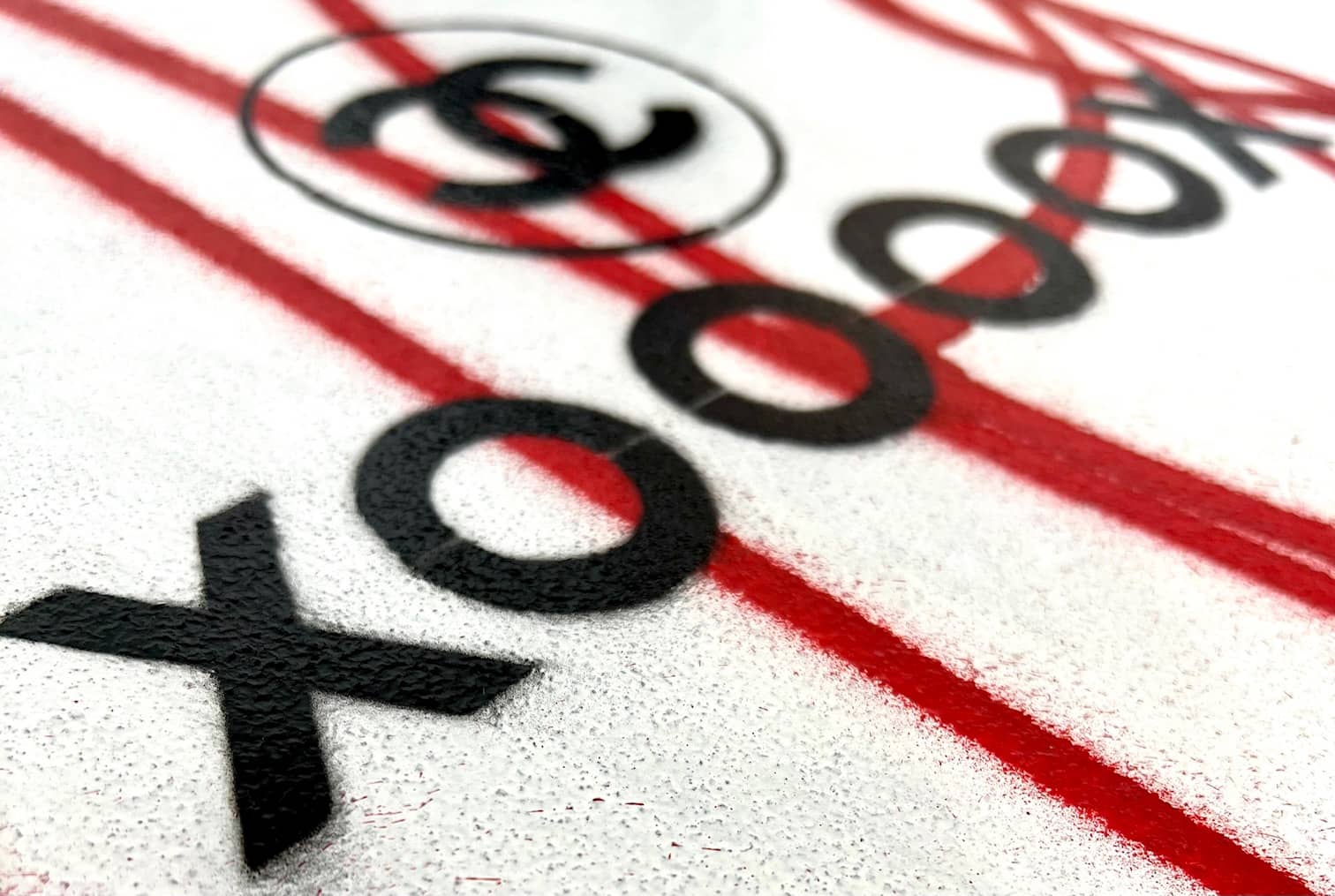 Born in 1979, living in Berlin – Germany’s first street art artist of international renown does not reveal much more about himself. From the age of 15 XOOOOX perfected his graffiti art. His trademark – life-size stencils of styled models, which he sprayed onto weathered, decayed surfaces in public spaces and signed with the two letters X and O of his pseudonym – attracted the attention of the art scene. At international exhibitions, the autodidact XOOOOX shows mainly abstract paintings, object art, works on paper and photography. Anyone who wants to buy XOOOOX has the choice between originals and limited, signed graphic editions.

XOOOOX usually works on old facades. Vintage looks and positioning are important to him. Occasionally, however, there are also works on “movable goods” such as steel doors or electrical boxes.

Street art lives from what surrounds it and the situation in which it is created. Rough facades, rusty gates, windy corners, time pressure, most difficult conditions for creation. This is the reason why many of the XOOOOX artworks offered in galleries are created on authentic wooden and steel supports.

He also works on large copper plates that develop a special aesthetic in light, which changes over time.

French street art artist Blek le Rat introduced XOOOOX to the stencil technique. He was a pioneer of the stencil, who was also on the road in Berlin.

In the spring of 2018, German FOCUS magazine already reported in issue 17/2018 about the Berlin Street artist XOOOOX and recommended the first graphic edition “Walking Lady” as an art tip and investment. Press reports in the Tagesspiegel Berlin, Die Zeit (Maedels raus aus der Hochglanzzone!) and Deutsche Welle have long been evidence of the artist’s rise. The New York Times recommended XOOOOX as one of “12 Treasures of Europe” on October 17, 2014.

In Amsterdam, the largest Street Art Museum in the world was currently opened in Lasloods Hall. The museum was founded by Peter Ernst Coolen on the premises of the NDSM docks. XOOOOX originals are also on display there as part of the collection.

At the age of 16, XOOOOX began to flip through his sister’s countless Vogues, cut out the models and stick them in the city. Later he switched to stencils, stencils. He tries to contrast with the glamour of the fashion world by applying the stylish and flawless models to weathered and urban surfaces. In many of his works he also uses logos of fashion brands like Hermes or Chanel, which he alienates. In some cases, this can also be understood as homage, as is the case with brands that look back on a long tradition. In others, however, it is rather a criticism of the over-industrialization of fashion and they invite the viewer to question it.

Art does not work without an art market. The development of street art has picked up speed rapidly in recent years. At the 2008 Red Auction in New York with Banksy, a work by a street art artist achieved a seven-digit result for the first time. The works of XOOOOX are already well into the five-digit range. This makes him the highest paid German artist in this genre, which naturally attracts buyers who buy his works as an investment.

The artist himself does not see this critically, he said in an interview:

“Many people bought Urban Art because it was new on the market and considered hip. You should only buy art if you’re convinced of it and if it triggers something in your mind. No matter if it makes you happy or frustrated. It doesn’t have to say something right away, but it must ask you new questions every day and you must find the answers. It works much like a relationship. It has to be an eternal question-answer game, otherwise it gets boring.

There is a sticker on a friend’s fridge that says “Buy what you want and it’s yours”. Spending money makes people happy and satisfies them at the same time.”