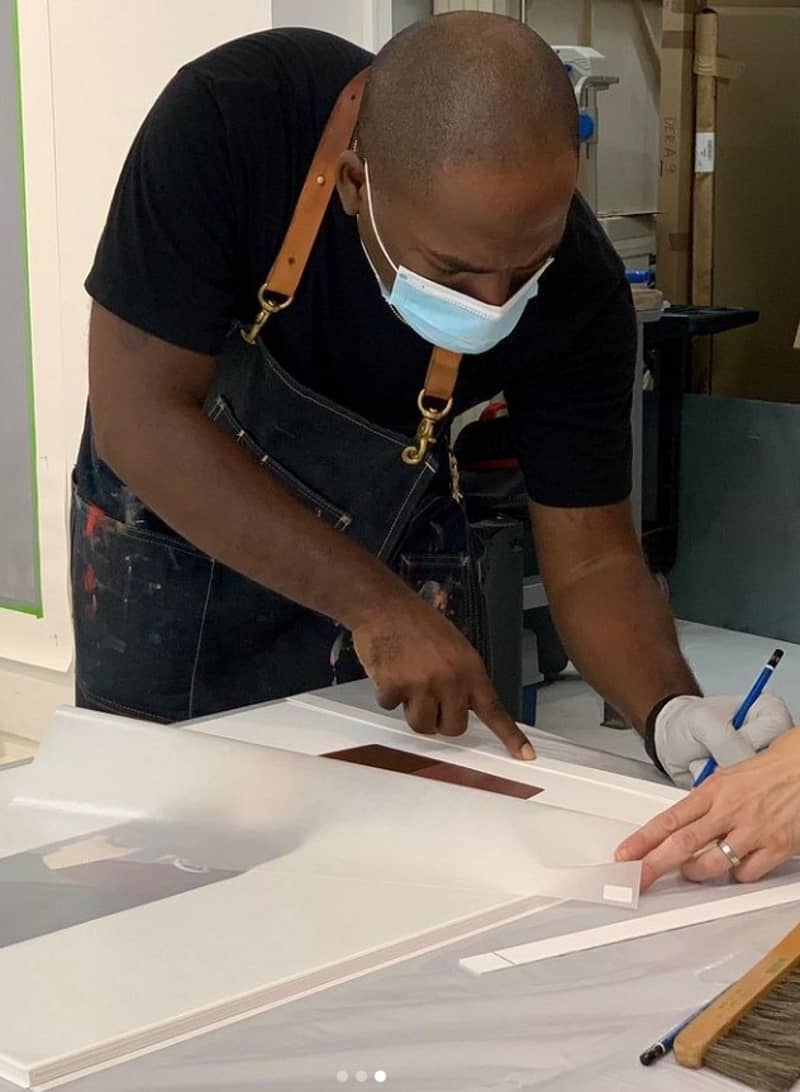 Derrick Adams – Self Portrait on Float

Derrick Adams - Self Portrait on Float

Christie’s New York set a new record for Derrick Adams in March 2021. A figurative painting set new standards for the artist. The second lot of the auction, “Figure in the Urban Landscape 31” (2019) by Adams, doubled expectations. The double-figure portrait of a father and daughter was expected to fetch about $100,000 to $150,000 and sold for $250,000 (fees included in all sale results). The price was a new auction high for a work by Derrick Adams.

Derrick Adams is a Baltimore-born artist living in Brooklyn and New York. His critically acclaimed work includes painting, collage, sculpture, performance, video, and sound installations. His multidisciplinary practice is concerned with the ways in which individuals’ ideals, aspirations, and personalities become tied to specific objects, colors, textures, symbols, and ideologies. His work explores the influence of popular culture on the formation of self-image and the relationship between the individual and the monument, how they coexist and embody each other. Adams is also deeply concerned with how African American experiences intersect with art history, American iconography, and consumerism. Self Portrait on Float is a typical masterpiece of the Black Artist.

Most notably in his Floater series like here in Self Portrait on Float, he portrays black Americans in their leisure time and posits that recreation itself is a political act when embraced by black communities. The radical nature of this position has materialized in Adams’ work in his Deconstruction Worker, Figure in the Urban Landscape, and Beauty World series. Formally, Adams’ practice is rooted in deconstructionist philosophies related to the fragmentation and manipulation of structure and surface and the connection of complex and unlikely forms. His tendency to layer, hybridize, and collage not only images and materials, but also different kinds of sensory experiences, links the artist to an estimable array of pioneers ranging from Hannah Höch and Henri Matisse to William H. Johnson and Romare Bearden. In Adams’ art, the process can also be understood as an analogy: “Everything we are is based on a certain construction,” he once remarked. Adams received his MFA from Columbia University and his BFA from Pratt Institute.

He is an alumnus of the Skowhegan School of Painting and Sculpture and the Marie Walsh Sharpe Foundation’s Studio Program. Derrick Adams is the recipient of a Robert Rauschenberg Foundation Residency (2019), a Gordon Parks Foundation Fellowship (2018), a Studio Museum Joyce Alexander Wein Artist Prize (2016), and a Louis Comfort Tiffany Award (2009). He has been the subject of numerous solo exhibitions, including Where I’m From – Derrick Adams (2019) at The Gallery at Baltimore City Hall; Derrick Adams: Sanctuary (2018) at the Museum of Arts and Design, New York; and Derrick Adams: Transmission (2018) at the Museum of Contemporary Art, Denver. Adams’ work has been featured in numerous important public exhibitions, including Men of Change: Power. Triumph. Truth. (2019) at the National Underground Railroad Freedom Center, Cincinnati; PERFORMA (2015, 2013, and 2005); The Shadows Took Shape (2014) and Radical Presence (2013-14) at The Studio Museum in Harlem; The Channel (2012) at the Brooklyn Academy of Music; Greater New York (2005) at MoMA PS1; and Open House: Working In Brooklyn (2004) at the Brooklyn Museum. His work is in the permanent collections of The Metropolitan Museum of Art, The Studio Museum in Harlem, the Whitney Museum of American Art, the Virginia Museum of Fine Arts, and the Birmingham Museum of Art.

Did you know that Derrick Adams’ artwork is featured in Beyoncé’s “MOOD 4 EVA” music video?

Derrick Adams is the cousin of Def Jam Records founder Russell Simmons and his brothers, Reverend Run of Run DMC and neo-African abstract expressionist Danny Simmons. Immediately following his art degree, Adams worked for eight years as curator and gallery director of RUSH, a nonprofit foundation established by his cousins to support underrepresented black artists, with galleries in New York and Philadelphia. His tenure was not due to nepotism: Adams has an exemplary artistic education. After earning a BA in Fine Arts at Pratt Institute, Adams completed a master’s degree at Columbia University, where he also taught other students. While at RUSH, he was known for promoting the careers of other artists, but in 2009, Adams decided to focus on his own work – and it wasn’t long before his career soared into the stratosphere. In a revealing interview, Derrick Adams spoke about his observation that “certain aspects of a perspective of black America are not being emphasized – success and normalcy, the triumphant things that happen in the culture.” This perception has informed much of Adams’ work in recent years, particularly the groundbreaking 2016 series Floater, which focused on black people enjoying leisure time in swimming pools. The series rightly placed black people in images from which they were often excluded-but it also celebrated their relatively newfound freedoms (as recently as the first half of the 20th century, black people were banned from America’s public swimming pools). In 2019’s Beauty World, Adams explored black female identity and empowerment, drawing inspiration from Brooklyn nail salons and layering makeup and hair over his images with acrylic paints. That same year, Derrick explored Black lives at home in Interior Life at Luxembourg + Dayan, taking a peek inside the homes and heads of his characters: Hang Up is fortunate to acquire editions from that exhibition. “I was interested in having conversations that were consistent with what I like to do in my work, which is to show African American culture, black culture, from an American perspective. Certain aspects of a perspective of black America are not highlighted – success and normalcy, the triumphant things that happen within the culture.”

Derrick Adams’ work is in the permanent collections of the Metropolitan Museum of Art, the Studio Museum in Harlem, the Whitney Museum of American Art, the Virginia Museum of Fine Arts, and the Birmingham Museum of Art-but it’s not limited to gallery space. If you look at Beyoncé’s 2020 visual album Black Is King (released in collaboration with Disney+), you’ll see an image from the Beauty World series in an art-drenched mansion, viewed by a leopard-print lady. Another place to admire the artist’s work is his hometown of Brooklyn, where he recently created an 85-panel glass wall for the Nostrand Avenue Train Station, just around the corner from his studio. It features people surrounded by streets, buildings and train tracks and is typical of his abstract style. Fans of the Floater series can even wear a Derrick Adams: thanks to a collaboration with swimwear manufacturer Vilbrequin, his figures now adorn a selection of swim trunks. Christie’s recently named Adams as one of six postwar and contemporary artists to add to your collection, and at auction his works regularly fetch five-figure sums. This year, his work Figure In The Urban Landscape 31 fetched $250,000, exceeding its upper estimate by $100,000. Self Portrait on Float is a Talking Piece by the black artist.