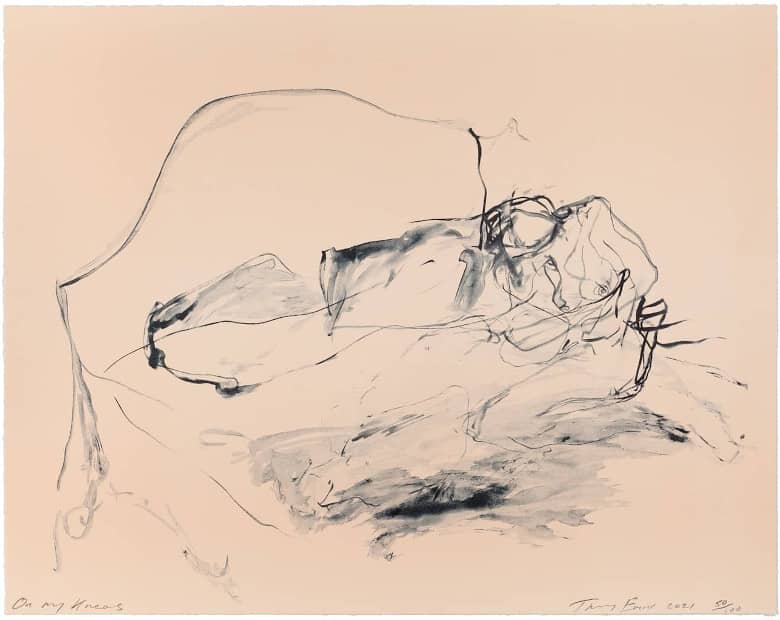 Tracey Emin – On My Knees

Emin and Munch: "The Loneliness of The Soul"

London hosted a spectacular Tracey Emin exhibition in the fall of 2020. The major museum exhibition “The Loneliness of The Soul” by Tracey Emin and Edvard Munch is on display at the Royal Academy of Arts in London until February 28, 2021. The exhibition features more than 25 works by Emin, including paintings, some of which are on view for the first time, as well as objects and sculptures. These works, which explore the loneliness of the soul, were chosen by Emin to work alongside a selection of 19 oil paintings and watercolors from the extensive collection of the Edvard Munch Museum in Oslo, Norway. As a result, Tracey Emin’s works are on view in a highly personal exhibition. The selection not only reveals how Munch was a constant inspiration-particularly through his profound depictions of women-but also demonstrates Tracey Emin’s wide-ranging abilities as an artist, often weaving together painting, drawing, and writing. Besides various Tracey Emin prints for sale you can also find the portfolio These Feelings were True with us.

“The Loneliness of The Soul” by Tracey Emin and Edvard Munch. The exhibition, which will initially be on view at the Royal Albert Hall on London, will travel on to Oslo in 2021. There, the new Edvard Munch Museum is currently under construction in Bjørvika, Oslo, Norway.