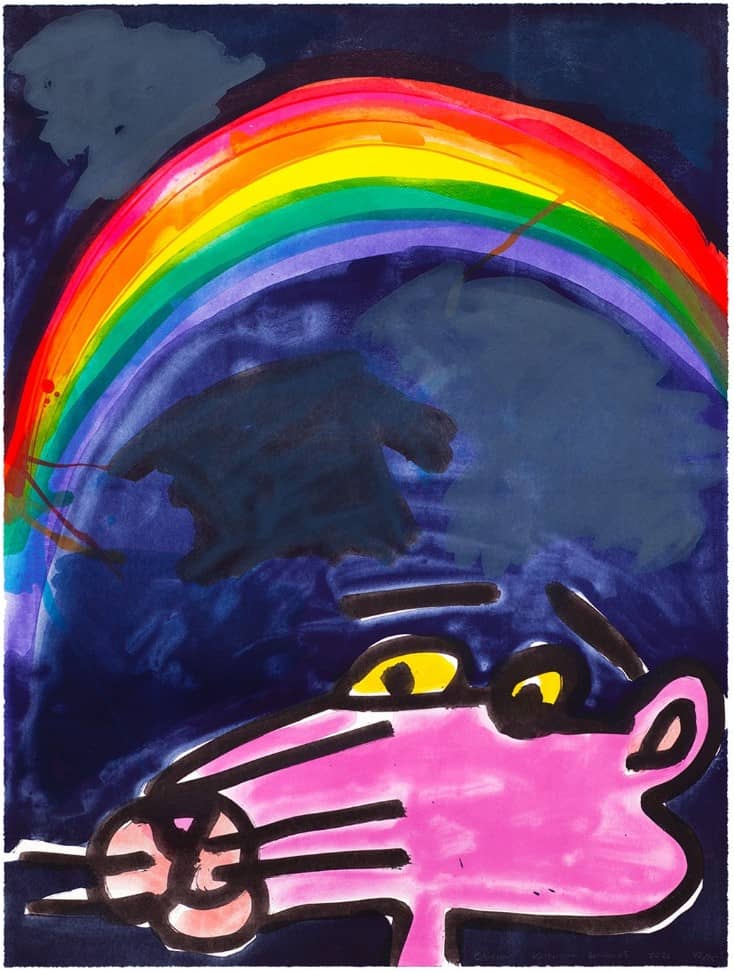 Bernhardt began painting the Pink Panther after she arrived at the Pink Palace Hotel (also called the Royal Hawai’ian Hotel), located on a sandy beach in Waikiki, Oahu, not far from an eighteen-foot bronze sculpture of King Kamehameha I, Hawai’i’s greatest warrior leader, who is usually adorned with tons of giant lei made from eight types of bright pink orchids. The pinkness of this trip continued after checking into the hotel, which had pink bath towels, pink sheets, pink eye masks for sleeping, pink rugs, pink beach chairs, pink beach towels, pink stationery, pink sunsets, pink pancakes for breakfast and the Pink Panther on the TV screens. After Bernhardt kept seeing videos of the panther – lying on a giant pink bed and while she strolled the hotel grounds, her son Khalifa kept watching Pink Panther videos from his cell phone – she decided the panther might look good on large-scale canvases and large-scale lithographs.

Bernhardt’s “Chorma” shows her Pink Panther under a colorful natural wonder – an intense rainbow glowing in the foreground against a dark and stormy sky of terror. Her print references tropical downpours in Puerto Rico, where violent atmospheric disturbances can seemingly miraculously dissolve into full-color rainbow extravaganzas. It could also be interpreted as a self-portrait of Bernhardt, who survived the pandemic, and more generally as a metaphor for hope and good triumphing over despair and evil. Fortunately, many can now see light at the end of the tunnel, and we too have extraordinary hope that the people of our planet can perceive the many wonders of nature and save our natural environment.