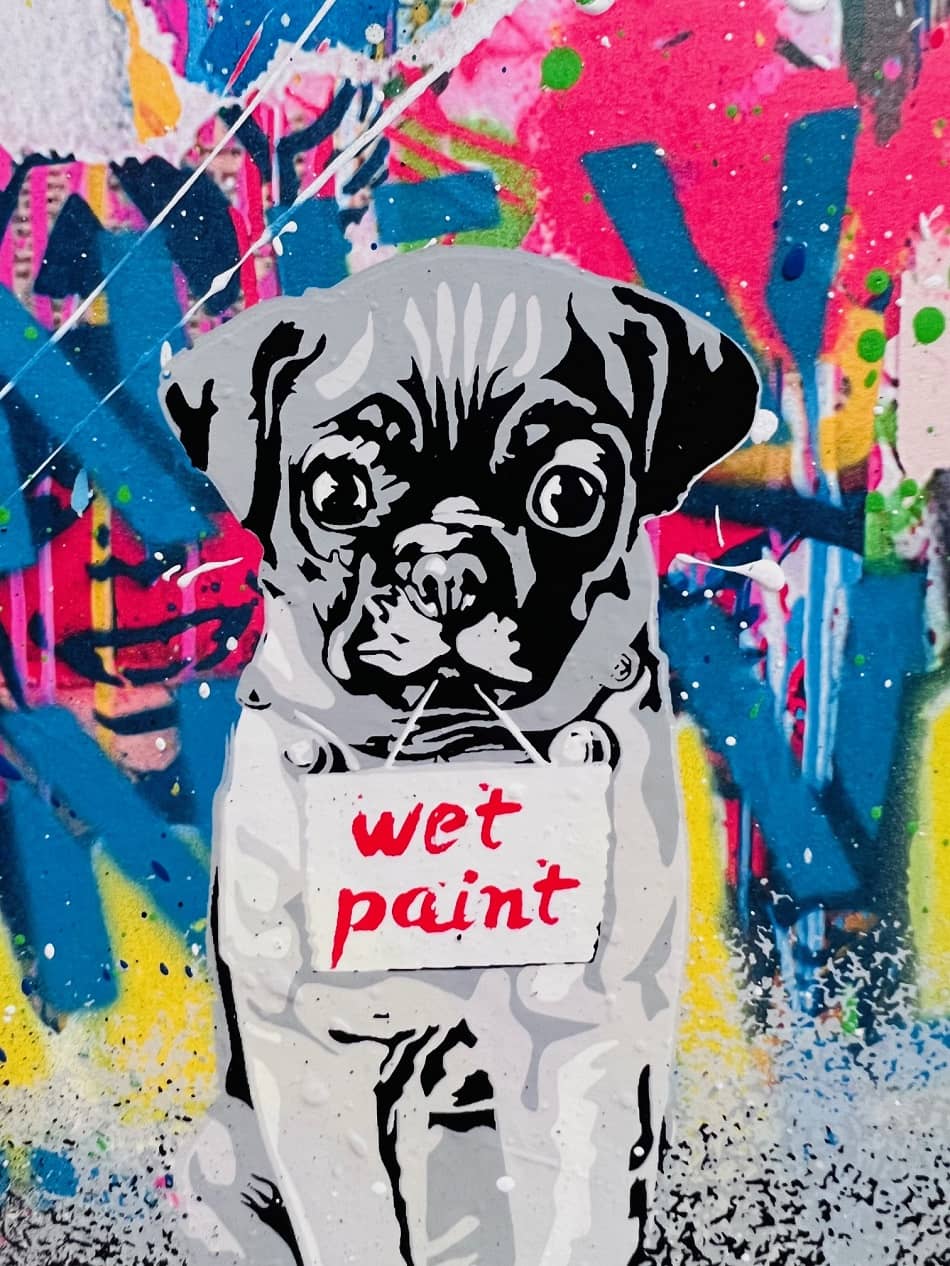 The signed unique artwork Juxtapose by Mr. Brainwash alias Thierry Guetta from 2021 shows two famous icons of our history: Charlie Chaplin and Albert Eistein. Mr. Brainwash uses these powerful images to transport positive and uplifting messages like “Love is the Answer” and hope.

The signed unique artwork Juxtapose by Mr. Brainwash alias Thierry Guetta from 2021 shows two famous icons of our history: Charlie Chaplin and Albert Eistein. Mr. Brainwash uses these powerful images to transport positive and uplifting messages like “Love is the Answer” and hope.

Mr. Brainwash Juxtapose contrasts two famous icons with each other in best Pop Art manner: Charlie Chaplin and Albert Einstein help spreading the message with a wink: Love is the Answer.

Juxtapose literally means putting things next to each other that do not belong together. So you can find almost all figures from the well-known works of Mr. Brainwash in this unique piece. Einstein, Charlie Chaplin, “Love is he Answer” and “Life is Beautiful”. Juxtapose has a long tradition with Mr. Brainwash, because there is always a potpourri of motives on the many large murals he created from Mexico to Seoul and Hong Kong.

A decade ago the documentary film Exit Through the Gift Shop, directed by Banksy and nominated for an Oscar, premiered and catapulted Mr. Brainwash to world fame. In the meantime, it can be said that the film that was actually supposed to tell Banksy’s story is the story of Thierry Guetta alias Mr. Brainwash. Thierry Guetta, this unknown man who filmed street artists in Los Angeles for years until he became one himself and earned over $1 million with a monumental exhibition in a former CBS studio in the heart of the City of Angels. Today the child of Garges-lès-Gonesse is the friend of All-Hollywood, he is invited by the Dalai Lama and the Pope to do their portraits.

“Art is a weapon. To be able to share, to give, especially to love, is the most beautiful weapon. It is not just a phrase or a sculpture, it is a medicine for the brain, for thinking.” He himself lives the American dream. He says so himself:

“When I won a Spirit Award, I saw myself again as a little boy in my Paris suburb, I must have been 9 years old, and I wondered what I was going to do with my life. These are the tricks that life can play on you! From where I come from to where I am today, not even a plane can take you there!”

Besides Madonna for whom he created the cover of the Celebration album, he now works for Hublot and other companies. On March 21, 2019 Mr. Brainwash met the Pope again in Rome and in December 2019, in cooperation with Pope Francis, he created for the third time an artwork entitled “Pope Art”. Mr. Brainwash has long worked with other stars for charity, including Rick Ross, football player Pele, Stan Lee, Michelle Obama, LA Clippers and many others. Besides Art Basel in Miami and Hong Kong, he also creates regular Juxtapose murals for the AMFAR Gala. His latest project is a huge mural on La Brea Avenue in Los Angeles, which was unveiled in July 2020. In early 2020, Mr. Brainwash announced the opening of a pop-up museum in Beverly Hills. It was planned in the Paley Center for Media designed by Richard Meier. But the COVID 19 pandemic put those plans on hold. He himself has remained positive during the pandemic and is more creative than ever before: “Something will be okay again. Something will not only be good again, but better than ever.” “We need positivity,” Guetta says about the pictures on the mural. “We are not just Los Angeles, we are a family today. We’re all together. We all have problems, but we will solve them all together. We will do better together. Los Angeles, it’s a family.” In an interview with the Los Angeles magazine on the occasion of the “Best of LA” issue, he repeats his creed – “You really have to follow your heart, because love is the answer” – but he also has a bigger message he wants to share with people. “Anyone can make it happen. Everyone is beautiful and can show light to everyone,” says Guetta. “This is what happened to me. I am no better than anyone else. I’m no more artistic than anyone else. I just don’t give up. I just work and let it happen. So, don “t give up. You’re beautiful and you can do something different in this world, just believe in it because you have the talent.

The mural is located at 1255 S. La Brea Avenue in Mid-Wilshire. Juxtapose by Mr. Brainwash is for sure one of the most typical works of Street Art.