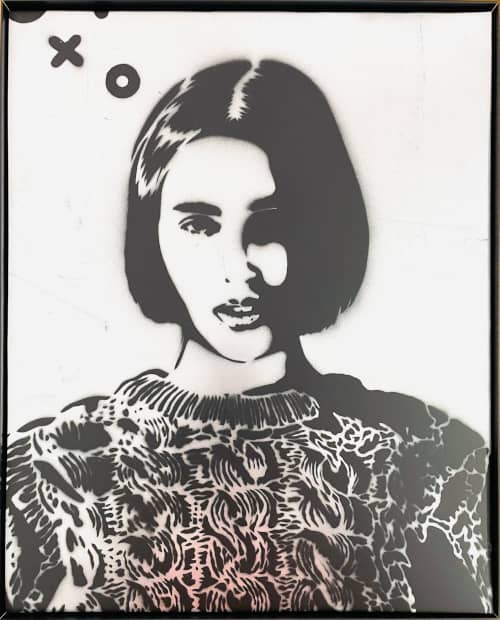 Ejsa spreads cozy vibes with her cable-knit sweater, an elaborate stencil artwork by XOOOOX. The reduced black and white coloring puts more emphasis on her facial expression and the artists love for detail.

Ejsa spreads cozy vibes with her cable-knit sweater, an elaborate stencil artwork by XOOOOX. The reduced black and white coloring puts more emphasis on her facial expression and the artists love for detail.

Born in 1979, center of life in Berlin – Germany’s first street artist with international reputation does not reveal much more about himself. From the age of 15, XOOOOX perfected his graffiti art. Through the street art pioneer Blek Le Rat he came to stencil and stencil art. With his trademark life-size stencils of styled models, which he sprays on weathered, dilapidated surfaces in public spaces and signs with the two letters X and O of his pseudonym, the art scene became aware of him. At international exhibitions, the self-taught artist XOOOOX shows mainly abstract paintings, object art, works on paper and photography. XOOOOX is currently the most successful German street artist. His works have been traded on the international art market for quite some time. For the first time in Austria, his works will be shown in Kitzbühel in 2022. Stencils and spray works can be found on facades and walls in Hamburg, Berlin, Munich, Zurich, London, Palermo and many other metropolises. The two exhibitions “Hidden Tracks” and “Lookie Lookie” at Frank Fluegel Gallery were sold out after a few weeks. Not least due to the phenomenal success of Banksy with his Balloon Girl, Street Art became one of the most successful and sought-after art movements worldwide.

Young collectors, especially millenials, are primarily responsible for the increasing demand for street art in particular. Millennial collectors currently spend more than six times as much money on art as collectors from the baby boomer generation.

The latest UBS Art Market Report by Clare McAndrew reports that Millennials have been very active in the art market over the past year. Many Millennials are willing to pay more for art than older people.

Millennials accounted for nearly half of affluent art buyers who spent $1 million or more on artwork in the past two years, according to the report. However, these millennials make up only one-third of the world’s wealthy. The study looked at art markets in the United Kingdom, Germany, Japan, Singapore and Hong Kong. It seems to suggest that the future of art prices is secure at a time of political and economic anxiety.