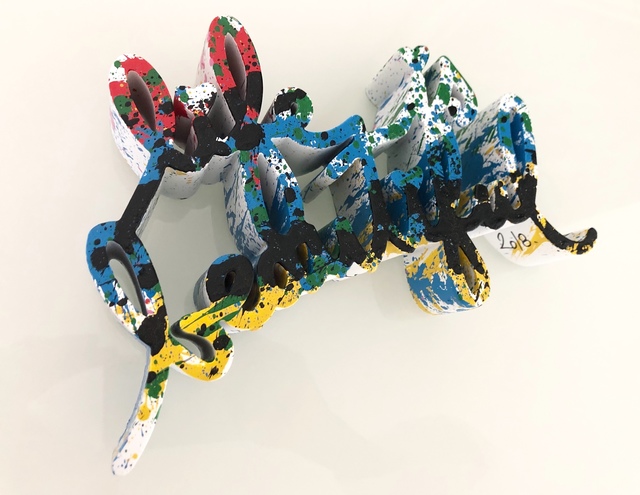 Life is Beautiful - Multicolor Splatter as sculpture. Hand-painted and therefore each one is unique.

Mr. Brainwash – Life is Beautiful was the title of Thierry Guetta’s (MBW) first exhibition, but it is also the positive message that is often processed in his works.
Thierry Guetta, street and pop artist, known under the nickname “Mr. Brainwash”, is today considered one of the most famous artists of street art. Positive, smiling and cheerful, the artist wants to convey joy and positive love messages through his artwork.
His first exhibition in 2008 entitled “Life is Beautiful” took place in a 15,000 square foot complex on Hollywood’s famous Sunset Boulevard with three hundred unique pieces, sculptures and prints. Among them was a lifelike replica of Edward Hopper’s Nighthawks. To organize his first exhibition, Mr. Brainwash used all his savings and mortgaged his house.
The exhibition was inaugurated on June 16, 2008, and was an immediate success with both critics and the public.
In this solo exhibition, the enigmatic French artist showed works of art and unique pieces with writings such as “Love is the Answer”, “Follow Your Dreams” and “Life is Beautiful”.
His originals with Albert Einstein, Mickey Mouse and Charlie Chaplin or Kate Moss were an extraordinary success, and the artist’s efforts were richly rewarded. His first solo exhibition sold out quickly.
From that moment on, Thierry Guetta’s fame continued to grow and he became one of the most popular street artists. With spray cans and stencils Mr. Brainwash makes colorful pictures, such as Juxtapose.

In 2009 Mr.Brainwash worked together with the most important singers. He worked with Michael Jackson, the Red Hot Chili Peppers and Madonna. For the singer the artist realized the cover of her album “Celebration”.
In 2010 he gained new fame with the Banksy film “Exit Through the Gift Shop”. The documentary film made with Bansky will be presented at the Sundance Film Festival. The success was enormous and he was nominated for an Oscar.
Over the years, the slogan “Life is Beautiful” has also taken shape in Mr. Brainwash’s sculpture and public murals.